[Update 24 hours later: kudos to whoever — Public Works, individuals, businesses — shoveled up all that salt, as it now is gone and will not drain into Plum Run after all!]

All this sodium chloride is headed for Plum Run, unless someone shovels it up for future use. And this, ironically, at a time when the Borough is expending a lot of effort to prevent Plum Run’s banks from eroding and is financing rain gardens to reduce runoff and attendant chemicals from entering streams.

The same day, the chloride level in Plum Run at the SW corner of the Borough measured 310ppm.

According to Molly Hunt et al., “Chlorides in Fresh Water“:

“In Rhode Island, the Department of Environmental Management (DEM) has set acceptable chloride concentration exposure limits for freshwater organisms at 860 ppm to prevent acute (immediate) exposure effects and at 230 ppm to prevent chronic (long-term) exposure effects. For drinking water, DEM has set a maximum contaminant level of 250 ppm chloride, which is the point at which water starts to taste salty.”

So 310 ppm is not good. What’s the problem? According to Jeremy Hinsdale, “How Road Salt Harms the Environment“:

“Chloride is toxic to aquatic life, and even low concentrations can produce harmful effects in freshwater ecosystems. High chloride levels in water can inhibit aquatic species’ growth and reproduction, impact food sources, and disrupt osmoregulation in amphibians. Some 40 percent of urban streams in the U.S. already have chloride levels that exceed the safe guidelines for aquatic life.”

“Runoff containing road salt can also cause oxygen depletion in bodies of water. ‘If runoff containing salt goes into a freshwater lake or stream, it will tend to sink towards the bottom, creating a dense layer that can inhibit gas exchange with the overlying water,’ says Juhl. ‘This can lead to the development of low oxygen conditions that are detrimental to fish and other aquatic organisms.’”

Do you want to measure your own local stream’s chloride content ? See Isaak Walton League: Protect streams from salt! for how to get a free kit. Here’s the measurement from Plum Run (the chloride level is shown by the peak of the yellowish area in the sensor on the right of the photo):

Road salt (sodium chloride) is everywhere during winter months. It keeps us safe on roads and sidewalks, but it can also pose a threat to fish and wildlife as well as human health.

Fish and bugs that live in freshwater streams can’t survive in extra salty water. And many of us (more than 118 million Americans) depend on local streams for drinking water. Water treatment plants are not equipped to filter out the extra salt, so it can end up in your tap water and even corrode your pipes.

You can take action.

(Sign up free for a kit to test a stream here. Salt in streams harms not only fish. but also other aquatic life… and humans!)

If you feel inclined to stock up on sodium chloride to apply to your sidewalk, here are some thoughts first:

Salt is harsh on pet’s feet, car undercarriages, footwear, wood floors… to say nothing of plants and water life. See also “The problem with Salt” on our site.

Salt spread on a dry surface, as often happens, is kicked up by passing cars, thus counterproductively pushing the salt to the edges of the driving surface and wafting chemicals into the air breathed by passersby and residents, with potential adverse health impacts.

Here are some ideas from Minnesota (where they know something about winter!) for reducing, but unfortunately not eliminating, your use of salt, in “4 earth-friendly tips to clean up your icy sidewalk” by Cody Nelson, MPR News, January 11, 2018:

The salt we’re so inclined to dump on roads and sidewalks after winter storms is a growing threat to Minnesota’s lakes and streams.

Chloride — the mineral in salt that’s toxic to fish, birds and other aquatic life — is now considered an impairment in 50 bodies of water across the state. Scientists only expect that number to rise.

While large-scale salt application is the biggest culprit, there are some things individuals can do to minimize their impact:

1) Break out the shovel. If you’re going to use salt, first clear off as much snow and ice as you can with a shovel or scraper. Manual removal is more effective, and it’s cheaper.

2) Don’t dump. A little salt goes a long way. Spread it out. According to Clean Water Minnesota, “a 12-ounce coffee cup of salt is enough to cover 10 sidewalk squares or a 20-foot driveway.”

3) Check the temperature. If it’s below 15 degrees, it’s too cold for salt to effectively melt ice. Consider using sand instead. It won’t melt the ice, but it will increase traction. Plus, sand is easier on your pet’s paws.

4) Sweep up excess salt. It’ll end up as runoff into waterways or the soil. Clean Water Minnesota recommends sweeping up whatever salt is left sitting on the pavement so you can reuse it after the next storm. 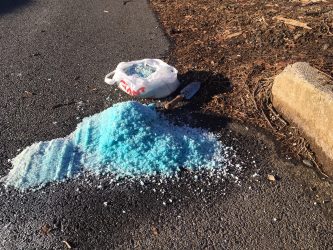 To the left: pile of taxpayer-financed road salt in a West Chester alley, 2/21/21, prior to being swept up and donated to a neighboring landscaper for (sparing) use. This is a big pile; the trowel to the right of the bag gives the scale.

• Mix sand with salt. Sand will give traction that salt doesn’t.

• Experiment with mixing in other substances like (unused) kitty litter or fireplace wood ashes.
.
• And about sweeping up excess salt, as shown above: keep an eye on streets and alleys!

• West Goshen municipality adds de-sugared beet molasses to reduce salt use and also the temperature at which salt can melt ice.

• For other alternatives, search the internet for “What melts snow besides salt” and check out results such as this article and this commercial product.

See also, from Minnesota: “‘Dead fish or dead people?’ The challenges of curbing road salt use” and “Shingle Creek: A cautionary tale for Minnesota’s water.”

West Goshen Township has added a new weapon in its arsenal against ice: beet juice. Dry salt is effective at lowering the melting temperature of ice to about 15 degrees Fahrenheit—that is, it will melt ice at temperatures of 15 degrees or above. De-sugared beet molasses, when added to dry salt or brine, can melt ice at temperatures as low as -25 degrees, while adding traction, acting as a corrosion inhibitor, and not harming the environment like other brine additives. The beet juice solution is not slippery and doesn’t stain roads or cars. The salt brine and beet juice combination provide optimal results, allowing maximum melting while releasing the least amount of salt onto the roadways. Because the brine solution does not need to be spread as heavily as road salt, trucks do not need to refill as often, meaning additional fuel savings.

If you are a homeowner, please let us know if you find a source for small quantities!

Fish and aquatic bugs — High amounts of chloride are toxic to fish, aquatic bugs, and amphibians. Chloride can negatively affect the fish and insect community structure, diversity and productivity, even at lower levels

Plants — Road salt splash can kill plants and trees along the roadside; plants that take up salty water through their roots can also suffer. Chloride in streams, lakes, and wetlands harms aquatic vegetation and can change the plant community structure.

Soil — Salt-laden soil can lose its ability to retain water and store nutrients and be more prone to erosion and sediment runoff (which also harms water quality).

Pets — Salt can sicken pets that consume it, lick it off their paws, or drink salty snow melt/runoff. It can also irritate their paw pads.

Wildlife — Some birds, like finches and house sparrows, can die from ingesting deicing salt. Some salt-sensitive species are particularly at risk.

Read the full post at Minnesota Pollution Control Agency. See lots more info on road salt pollution in “Road salt is polluting our water. Here’s how we can fix it,”  MPR News, 12/7/17

The first photo was taken in West Chester, 3/4/19, with excess salt lying at the left side and center of the dry alley, but passing cars have scattered the salt away from the parts of the pavement where it could melt any snow that the tires of cars could actually come in contact with. The darker lines running along the alley are brine, which does not scatter to the edges and middle or into adjoining soil. though it may be worn down and distributed into the air. 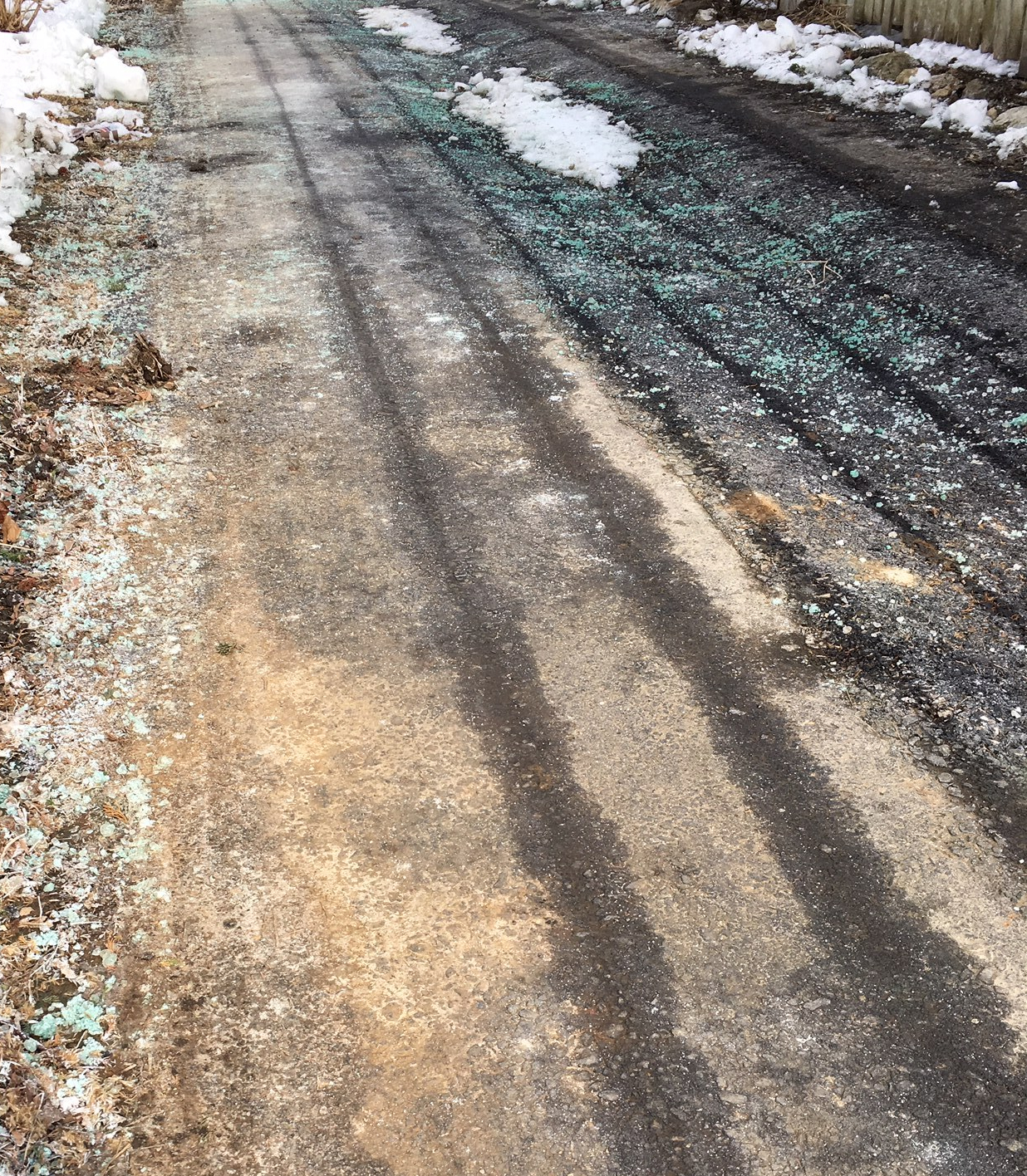 The second photo shows the same alley the same day. The blue-green spots on the fence contain road salt projected widely and forcibly from the salt-spreading truck;. You can also see salt crystals lying on the ground behind the rose bush and melted spots where they have landed in the snow which have to be removed by hand to prevent the salt from soaking into the ground and killing off the sorts of alleyside plantings that help keep the Borough beautiful.