Investigating the attractiveness and lethality of varying catch basin conditions to mosquitoes, researchers hypothesized that blackberry leaf litter could be shown to be lethal to developing mosquito larvae, and, therefore, act as a natural ecological trap for Cx. Pipiens….

read more at Beyond Pesticides

Beyond Pesticides, 12/14/18. [Climate change + pesticides: a deadly combination for bumblebees… and flowering plants]

(Beyond Pesticides, December 14, 2018) The richness, diversity, and abundance of wild bumblebees in Vermont has plummeted over the last century, according to an analysis from researchers at the University of Vermont and Vermont Center for Ecostudies (VCE). This research adds fresh evidence to the growing realization that mankind is witnessing and contributing to, as the New York Times recently labeled, a worldwide insect apocalypse. “We’re losing bumblebees even before we fully understand their benefits to our economy and well-being, or how they fit into ecosystems,” said Kent McFarland, study coauthor and conservation biologist at VCE in a press release.

Researchers conducted surveys with the help of 53 trained citizen scientists. Alongside the researchers, these individuals surveyed bumblebee populations through a combination of photos of wild bees and net collections. In total, over 81% of the state’s municipalities were included in the survey, representing all of Vermont pollinator’s biophysical regions….

Read more at Beyond Pesticides.

Thanks are due to many: Chef Sylvie, La Baguette Magique, Kim Stack, and Two Gander Farm for the vegetarian fare, Tom Buglio for the piano accompaniment, live auctioneer Lori Zytkowicz from Briggs Auctions, moderator Sa’ed Atshan, the hard-working planning committee, those who set up and then cleaned up the venue, and all those who donated or purchased auction items and enjoyed a great evening supporting us.

A few of the many tables of diners, with some of the auction items on the right:

By Boyce Upholt, The New Republic, December 10, 2018. [Short version: Monsanto destroys the environment and non-target plants, making the money while impelling farmers to ruin or murder. A true horror story.]

Monsanto’s new herbicide was supposed to save U.S. farmers from financial ruin. Instead, it upended the agriculture industry, pitting neighbor against neighbor in a struggle for survival.

Mike Wallace sat in his pickup truck on a dusty back road near his farm outside Leachville, Arkansas, typing impatiently into his cell phone. “I’m waiting on you,” he wrote. “You coming?” It was hot for late October. The rows of soybeans, cotton, and corn, which just days ago had spread across much of the region, were largely gone, replaced by dry, flat dirt. The 2016 harvesting season was nearly over. A minute passed, and Wallace typed another message, sounding slightly triumphant. “Looks like you don’t have much to say now.

Wallace, 55, was a prominent figure in the Arkansas Delta farming community. His 5,000-acre farm was large, although the yield on that year’s soybean crop hadn’t been as successful as he had expected. Wallace believed he knew why his crops had failed, and it had nothing to do with the sun or the rain or the decisions he had made about when to put his seeds in the ground. Instead, he blamed a 26-year-old farmhand named Curtis Jones for illegally spraying dicamba, a controversial weed killer, on a neighboring farm. Wallace believed the dicamba had drifted onto his fields and damaged almost half of his soybean crop, costing him hundreds of thousands of dollars.

It wasn’t the first time this had occurred. The previous year, dicamba from another farm had also drifted onto Wallace’s fields, causing the leaves of his soybeans to pucker into ugly cups fringed with white fuzz. He complained to the Arkansas State Plant Board, which oversees such disputes. The agency fined Wallace’s neighbor, but Wallace was never compensated for the lost revenue. …

read more at The New Republic

By Michele Berardi, Daily Local News, Sept 3, 2018. Looking forward to cuting down on chemical herbicides in the next growing season!

KENNETT SQUARE — It’s not every day you see a heard of goats at a retirement community, however every day residents and staff at Kendal~Crosslands Communities in Kennett Square, care for the environment.

“We have a section of our 500-acre campus that can easily be overrun with invasive or otherwise problematic species of plants”, says Casey Groff, staff horticulturist and grounds manager. “Instead of resorting to herbicides, machine rental or exhausting manual removal, goats will eat and thrive on many of these weeds. This can be a win/win situation,” says Groff.

Goats are a beneficial land clearing tool. The versatility of goats as a sustainable agricultural asset has been well documented for centuries. Using goats in the role of eco-friendly, all-natural, land-clearing machines is a fairly new concept that is catching on across the nation as an option to herbicides….

Environmentalists and those just learning about the challenges we are facing with a warming planet gathered at West Chester University on Friday, December 7, to view the film “The Future of Energy.” 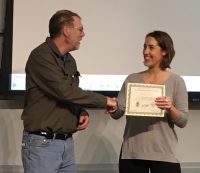 The program, moderated by Paula Kline of Ready for 100, also featured the presentation of an award for volunteer of the year on behalf of Don’t Spray Me! by Sierra Club of SE PA leader Wylie. Rachel Davis, who won this honor as a result of her leadership on environmental issues in the community, headed the program Adopt a Drain with the Sierra Club Youth Corps, monitoring storm drains throughout West Chester Borough. Rachel is a member of Mayor Herrin’s committee to phase out the use of single-use plastic in the borough. She was also a block captain and board member for Don’t Spray Me! and serves the Borough on the Sustainability Advisory Committee. Congratulations, Rachel.

This film, the final this year in a series of four, was sponsored by Don’t Spray Me!, Sierra Club, PennFuture, PennEnvironment and West Chester University’s Office of Sustainability. This second annual series was presented to the community in memory of Graham Hudgings, who died last year as a result of chemical poisoning. Graham wanted everyone to be aware of the dangers of pesticides, herbicides, fungicides and all of the everyday chemicals people now encounter in their daily lives.

For background info on the film, see here.

It’s been 35 years since Carol Van Strum first published “A Bitter Fog,” the Christopher Award winning book telling the story of a “harmless” herbicide first sprayed over her family farm in 1975.

Her family members became ill. Farm animals and area wildlife died or gave birth to deformed offspring. Her Lincoln County, Oregon, neighbors had similar experiences, including frequent miscarriages of their own pregnancies.

Efforts to get answers as the casualties mounted were stymied by the timber companies, the herbicide makers, and federal agencies like the U.S. Forest Service, the USDA, and the EPA. Residents discovered they’d been sprayed with variations of Agent Orange – which Congress had ultimately banned for use in Viet Nam because of the health effects. That didn’t halt its use in Oregon, however, and while the government collected data on the effects of the chemicals on animals and humans, residents engaged in a decades-long battle to halt the practice….