Success! – Home improvement retailers follow through on commitments to remove phthalates from flooring. The environmental organization Safer Chemicals, Healthy Families (SCHF) celebrates this recent win in the reduction of phthalate use in home remodeling products. In 2015, SCHF secured commitments from home remodeling stores Home Depot, Lowe’s, Lumber Liquidators, and Menards to eliminate added phthalates from flooring. But first – what are phthalates and why are we concerned about them?

Phthalates are a class of chemical compounds commonly used in home flooring, along with plastic containers, cosmetics, and other personal care products. Phthalates are so widely used that they have made their way into our bodies. Once phthalates are inside the body, they break down into metabolites and pass through. The CDC and FDA have not said outright that these chemicals are harmful to us, although many are concerned that prolonged exposure may cause adverse health effects.

Nowadays, you can’t escape manufactured chemicals – they surround us everywhere we go, they’re in our homes, our food and water, and ultimately in our own bodies. So let’s applaud these stores that are reducing their contribution of chemicals to the environment! Please see SCHF’s full article and visit their site to learn more about minimizing your exposure to chemicals. 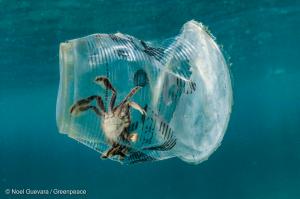 A crab was trapped inside a discarded Zagu milktea cup in Verde Island Passage, the epicenter of global marine biodiversity, in Batangas City, the Philippines.

Greenpeace performed a 3-day underwater exploration which revealed that the area is littered with plastic bags, “some showing visible signs of being among the corals for a very long time”. A majority of the litter was plastic produced by large companies such as Nestle and Unilever. In fact, a recent report by the Global Alliance for Incinerator Alternatives (GAIA) found that Nestle and Unilever are responsible for a quarter of throwaway plastic driving the plastic pollution crisis in the Philippines.

If big companies don’t respond to our calls for reduction in single-use plastic production, these places of “paradise” like Verde Island Passage, will be lost – Abigail Aguilar, Greenpeace Philippines Campaigner

Don’t Spray Me! and the West Chester Green Team encourage you as a consumer to reduce your use of single-use plastics to prevent further destruction of our beautiful environment.

To learn more and see photos and videos of the waste found in Verde Island Passage, please visit Greenpeace’s article.

email from Environmental Action, 7/8/18 [We also need to point out that it’s not just about pollution, because discarded plastics can favor mosquito breeding. Plastic containers and bags in the street can hold rainwater; plastic that enters storm drains can clog the drains and cause standing water retention; and plastic in waterways can clog flow and produce stagnant surface areas.]

A World Health Organization (WHO) working group just announced that they have concluded that styrene, a foundational component of polystyrene foam, probably causes cancer. 1

In addition to this plastic foam polluting our rivers, lakes and oceans, and harming wildlife, it also risks human health.

If enough of us speak up, we can convince our leaders to ban harmful plastic foam. Add your name today.

From coffee cups to fast food containers, polystyrene foam — what most of us call Styrofoam — is used every day all across the country. And this plastic foam often ends up polluting our water, and risking our health and wildlife. 2

In early April, a young sperm whale washed up on a beach in Spain with 64 pounds of human-made trash in its digestive system. 3 In June, a pilot whale was found in a canal in Thailand, with 80 plastic bags and other plastic debris in its stomach, unable to swim or breathe. 4

It’s stories like these that make it clear, it’s time to act to reduce and rid our planet of plastic pollution.

One place we can start is to not use plastics that end up in our oceans in the first place. One of the worst forms of plastic pollution comes from plastic polystyrene foam. This foam never fully degrades — every single bit of polystyrene foam ever made is still out there. 5

Thank you for taking environmental action, 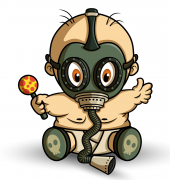