Fish and aquatic bugs — High amounts of chloride are toxic to fish, aquatic bugs, and amphibians. Chloride can negatively affect the fish and insect community structure, diversity and productivity, even at lower levels

Plants — Road salt splash can kill plants and trees along the roadside; plants that take up salty water through their roots can also suffer. Chloride in streams, lakes, and wetlands harms aquatic vegetation and can change the plant community structure.

Soil — Salt-laden soil can lose its ability to retain water and store nutrients and be more prone to erosion and sediment runoff (which also harms water quality).

Pets — Salt can sicken pets that consume it, lick it off their paws, or drink salty snow melt/runoff. It can also irritate their paw pads.

Wildlife — Some birds, like finches and house sparrows, can die from ingesting deicing salt. Some salt-sensitive species are particularly at risk.

Read the full post at Minnesota Pollution Control Agency. See lots more info on road salt pollution in “Road salt is polluting our water. Here’s how we can fix it,”  MPR News, 12/7/17

The first photo was taken in West Chester, 3/4/19, with excess salt lying at the left side and center of the dry alley, but passing cars have scattered the salt away from the parts of the pavement where it could melt any snow that the tires of cars could actually come in contact with. The darker lines running along the alley are brine, which does not scatter to the edges and middle or into adjoining soil. though it may be worn down and distributed into the air. 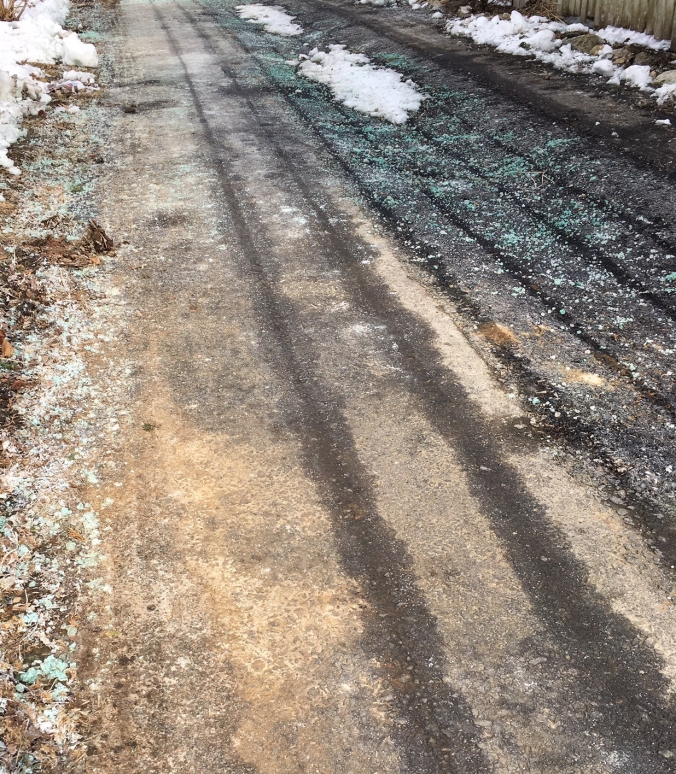 The second photo shows the same alley the same day. The blue-green spots on the fence contain road salt projected widely and forcibly from the salt-spreading truck;. You can also see salt crystals lying on the ground behind the rose bush and melted spots where they have landed in the snow which have to be removed by hand to prevent the salt from soaking into the ground and killing off the sorts of alleyside plantings that help keep the Borough beautiful.

One thought on “The problem with salt”